My parents caught the auction bug when we moved to Belgium in the early 1980’s.  They were determined to make the most of our time there (in many ways) – so we brought only our clothes and other necessities – with plans to leave the 70’s behind and furnish our lives going forward with classic European furnishings and décor.  Attending the weekly and monthly auctions became a ritual, and what began as a few functional pieces (required for sleeping and eating) quickly turned into the beginnings of an amazing collection.  Our time in Belgium was originally meant to be a 2-year stint, it ended up a 10-year journey making enormous impacts on our lives forever.  But, for now, back to the auctions…

Some of the pieces came home ready to begin functioning or slide into a vignette right away.  Other pieces became weekend refurb projects that yielded some amazing items that remain the stars of my parents’ home.  All of the “things” acquired during our stay in Belgium as well as through our travels throughout Europe, remain in our family.  They are either in my home, my sister Bunny’s or still with my parents.  We have a rule, if one grows tired of a piece – its next stop is discussed among the family – nothing is discarded.

Bunny and I went to a few auctions with my parents – but didn’t catch the bug until we were both living in Maryland.  Bunny had seen an article in Southern Living magazine about a weekly auction in Crumpton, MD.  Crumpton is a little town close to the eastern shore of Maryland and just south of the Delaware state line.  The article talked about the auction every Wednesday (rain or shine) with treasures to be had and Amish food – what’s not to love??  Since it was less than 90 minutes from us, we took a Wednesday and made our way to Crumpton.

Within the first 10 minutes, we were hooked!  The sound of the auctioneer, the emotional adrenaline rush when you’ve decided you simply must have an item and it’s coming up for bid, and the satisfaction when you’ve won your treasure and claim it as MINE.  The feeling is the same whether you were the only one bidding or you outlasted multiple bidders. Winning is AWESOME!

We were going once a month – we even started consigning some things to local antique shops with some success.  One trip, we were a bit overzealous in our buying and we came home with pieces of furniture tied to the roof racks of my SUV.  Family members were humming the theme song to the TV show “Sanford and Son” as we drove into the neighborhood. ?

Bunny and her family have been full-time Florida residents for 15 years now – but going to Crumpton is still one of the top things she misses about living in this area.  Whenever I go – I send her a text with this picture.  Needless to say – I receive an angry/jealous response. ? 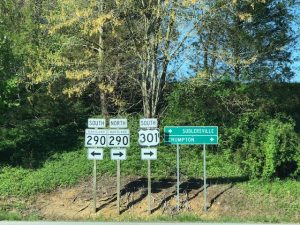 The Crumpton auctions have evolved a bit over the years – but they are still exciting and still full of random treasures.  Now I get to share the treasures I find with all of you!  Seriously, I can’t keep it all (as much as I’d love to). Mr. Single comes with me when he can.  He’s hooked as well.  He’s started his own collections and he lives for the people watching and the Amish food!

The auctioneer presiding as each item is held for all to see and bid. 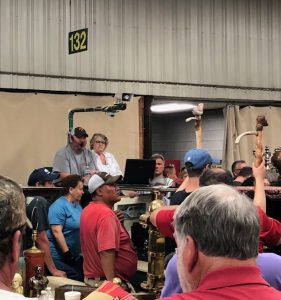 I’m usually one of the folks who stands next to the auctioneer’s stand – but as you can see, the next items I’ve got my eye on are a few tables away….good time to sneak over and get a pretzel-dog for lunch ?

And look who won what she was going after….complete with proof to the randomness of the Crumpton auction – a wood duck decoy in rough shape ended up included in one of the lots I won! ? Mr. Single thinks he should end up on the fire wood pile. But, I think he might be just right thing to balance out a nice vignette this fall….we’ll see! 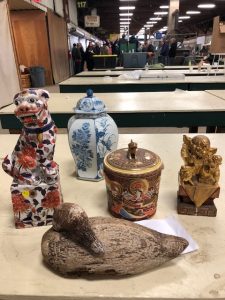 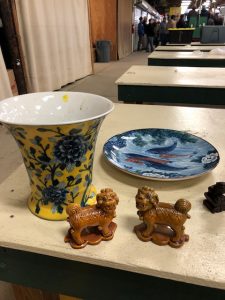 Check out that FABULOUS multi-colored Foo!  I fought hard for him and had multiple people ask, after I had won, if they could take a picture of him.  Darn paparazzi!  He’s famous! ?